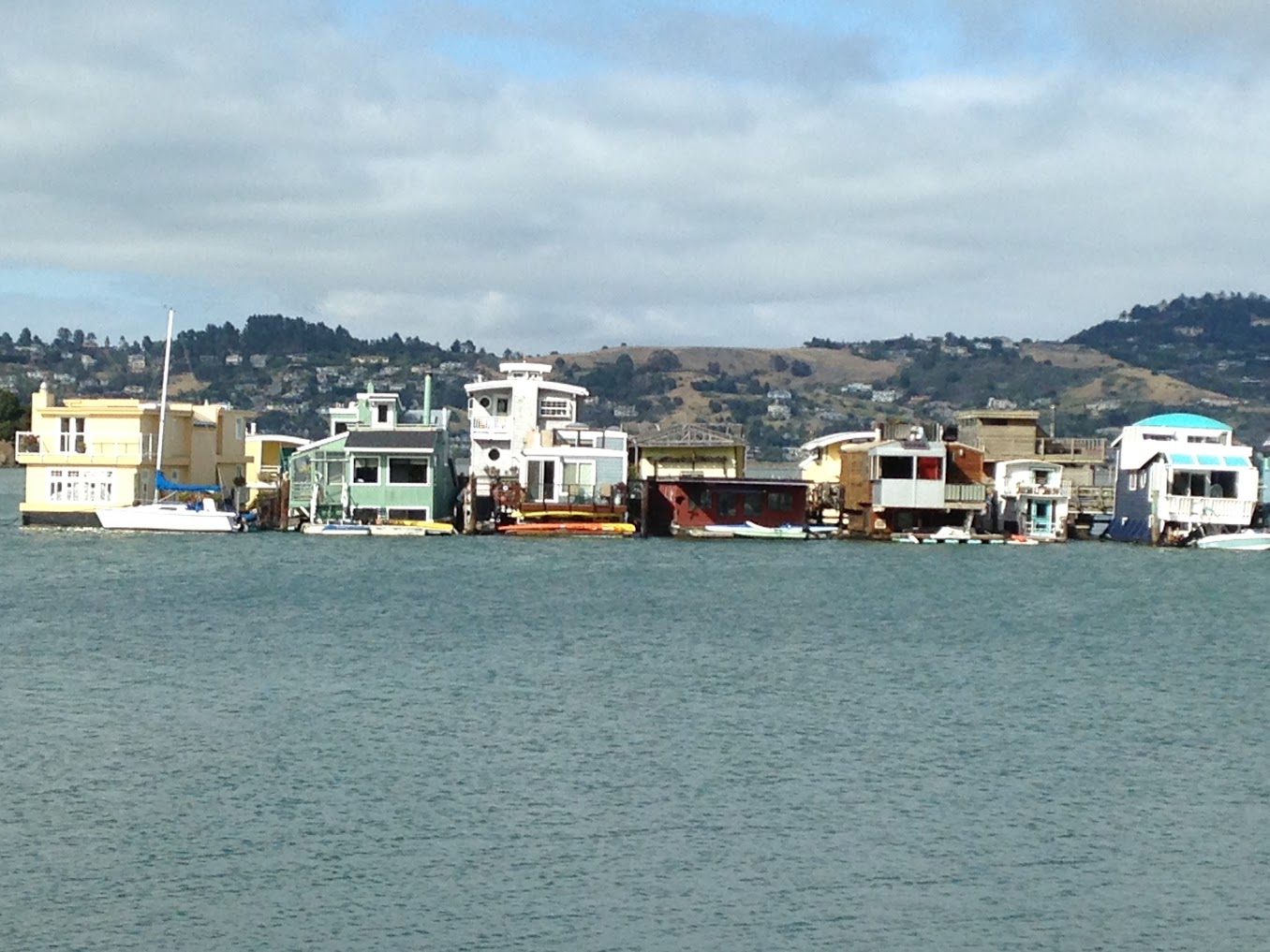 There are 400 houseboats in Sausalito.

I spent my seven days in the Bay Area with my older brother in his family in Sausalito, a town of 7000 people. It is the first city you enter when crossing the Golden Gate Bridge from San Francisco. Although Sausalito comes across as a charming little town, Marin County is filled with only rich people, with a per-capita income that far exceeds that of wealthy San Francisco. The views are especially spectacular, along with access to Napa Valley and San Francisco and the surrounding parks.

My brother lives in this enchanting houseboat right on the water. It is not a true boat that can sail away, but the house has electricity and plumbing. The 400 houseboats of Sausalito are settled on a few docks, even of which have their own neighborhood characteristics, especially with regard to outdoor tidiness. One dock will be quite free of clutter, whereas another will display various plants, bicycles, and items out of a garage sale. The houseboats have a dock association and formal electricity, mail, and trash collection services. The “homeless” people of this houseboat community are ragged sailboats loitering in the water. While I have heard people speak of them with sympathy, I cannot help but think, “They have a boat in Marin County. They are the richest homeless people ever.”

Perhaps the most charming way to travel between San Francisco and Sausalito is to take a ferry. This ferry has to be one of the most expensive in the world. It costs $10.75 to go 13 kilometers! During my stay, I made three back-and-forth trips, totaling $65. The ferry south to San Francisco is much faster than the return trip, 22-23 minutes vs. average of 28 minutes. Everyone should do it at least once.

I have been to San Francisco many times, more than Los Angeles or Manhattan, but there is still so much I want to do there! The week I spent was a breeze. I spent a few hours in Golden Gate Park, and I discovered that it is actually larger than Central Park! San Francisco’s land mass is exactly twice that of Manhattan. Golden Gate Park is 21% larger than Central Park, but the latter is geographically and culturally a bigger share of Manhattan than the former is of San Francisco.

I went to a number of dining establishments in the city but only because I was able to locate happy hour deals with $1 oysters. Even during happy hour, a beer in San Francisco will run $4-$6. It does not feel that long ago when I was in Southeast Asia and that would be an impossible price.

San Francisco is becoming notorious for its extortionate real estate prices, right up there with Manhattan. My younger brother was in town, and we went to the top of Russian Hill, where the windiest street in the world, Lombard Street, is located. A few years ago, my brother lived in a 300-square-feet flat on that tourist-laden section of the road and paid $1200 per month. I saw that the flat now rents in excess of $3000 per month! The views from the location are brilliant, however, my brother would nearly hit tourists with the door, as he exited his home.

Engines and winding wheels of San Francisco cable cars. There used to be 75 miles of routes, but now there are less than five miles.

San Francisco has at least 50 hills.

Alcatraz Island sells out more than a month in advance. I have been only once, and I do not remember the childhood visit.

San Francisco Ferry Building is gorgeous. The clock tower was designed after the Giralda in Sevilla, which I recognized, having visited it in November. The inside of the building is an awesome overpriced food mart, with organic/gluten-free/health-nonsense-type establishments.

Asiana Airlines from NRT to SFO