The City outside the United States I Have Visited the Most. . .

My footprint in Seoul

Background
The city outside the United States that I have visited the most is Seoul, South Korea. I estimate my total visits at 15 with a total duration of approximately three years, owing mostly due to summers spent in Seoul as a child. My single mother would drop me off in Seoul with my grandmother and my uncles and aunts. Effectively, my mother used Seoul as a summer babysitter. I do not remember much of Seoul in the 1980s, but that is just as well, as it was an unremarkable metropolis then. In the 2010s, I have made only three visits to Seoul, but I enjoy them thoroughly, as I can see the city morphing into this futuristic cosmopolitan space, in the same vein as Singapore and Hong Kong. 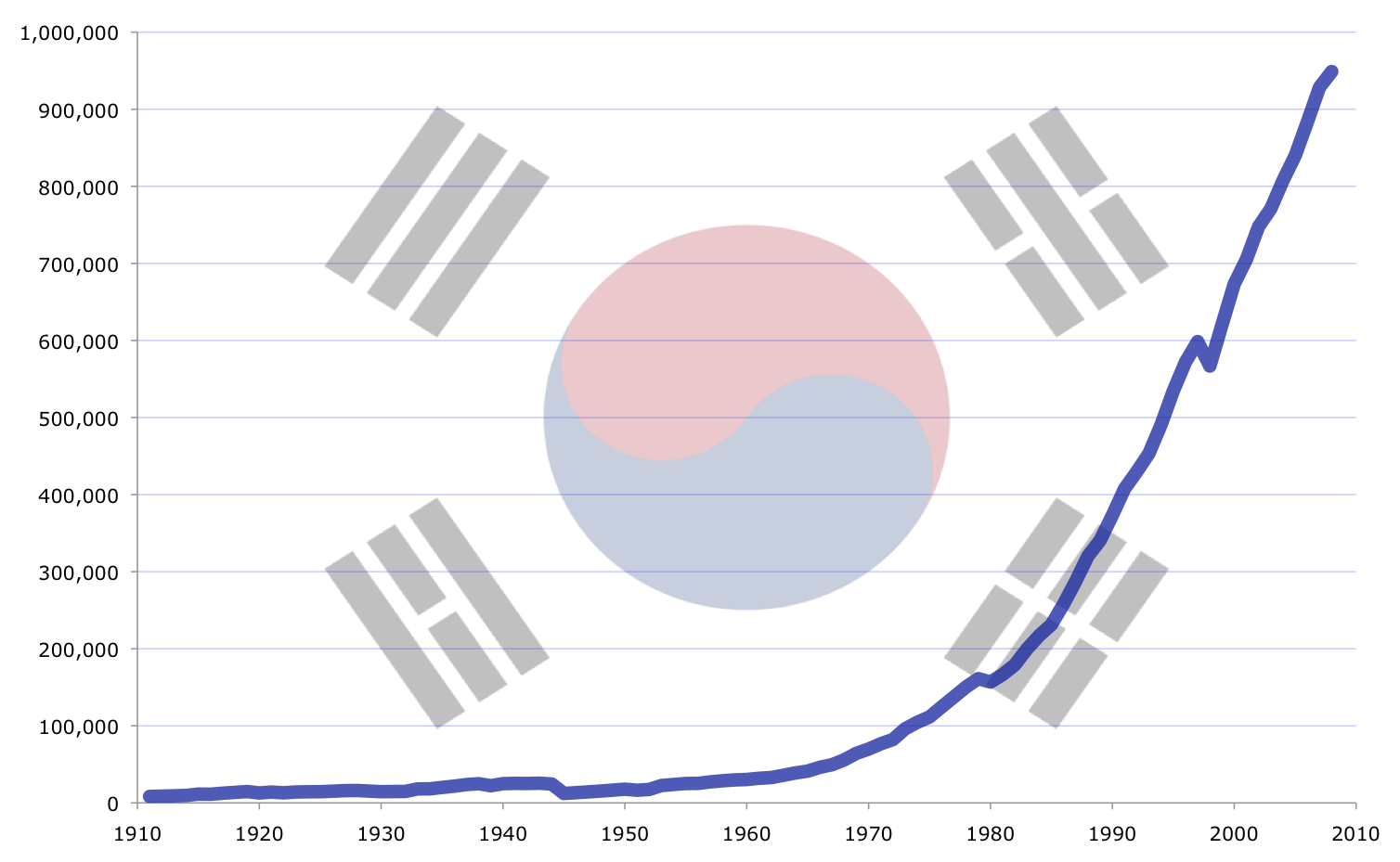 South Korea’s economy went H.A.M., especially starting in the late-1980s. The country is one of the few trillion-dollar economies. Graph source: Wikipedia.

The fact that is often cited is that Bangladesh had a more prosperous economy than that of South Korea in the 1960s. Things can change fast, and I often remind people that the appeal of travel destinations change as quickly as that of people and things. It would not surprise me if 10 years from now, Buenos Aires is no longer as popular and Myanmar is mentioned alongside Thailand as go-to spots.

Bacchus is a Korean drink originally formulated in 1963. Its can design has been changed suspiciously to look identical to that of Red Bull. I have not tried Bacchus.

South Korea’s economy is 13th both in terms of total GDP and purchasing power parity. The country is a powerhouse in electronics, telecommunications, and automobiles. Americans will be familiar with companies such as LG, Samsung, and Hyundai. What they might not realize is how widespread these corporate tentacles reach. These conglomerates are more involved than just about any company in the world, with the most obvious sign being the countless residential towers emblazoned with the logos of these corporations. Imagine if the many skyscrapers of Manhattan were branded “General Motors” or “Apple.”

A staircase art installation at Leeum, Samsung Museum of Art. The museum was designed by Mario Botta, Rem Koolhaas, and Jean Nouvel. The exhibits are a mix of traditional Korean artifacts and lesser works by famous artists such as Richter and Twombly.

Language
I hardly speak any Korean. I would place my limited understanding of it in a multi-way tie with a few Romance languages. While it is universally good travel advice to learn a little language to visit a country, I narrow this rule to one’s native alphabet. That is, if you speak English, make an effort for Spanish, French, etc. The U.S. government categorizes languages into five levels of difficulty, and Korean is in the toughest bucket, along with Arabic, Chinese, and Japanese. Learning a new alphabet is so difficult. Regularly using the subway or going to museums, I would force myself to read the Korean placards and signs, but the crutch of immediately understandable English is hard to resist. Even when I can read Korean phonetically, I have little idea of what it means. The speed with which I read it is painfully slow. I can read any other Romance language much easier than I could Korean.

Cultural Oddities
Seoul has the highest amount of hand-holding among non-romantic friends in the world. Almost all the hand- and arm-holding is by young women, sometimes three-wide. Teenagers and women in their 20s and 30s will interlock their arms or hands for long stretches. All young women have at least a few friends worth hand- and arm-holding. I have seen amusing bonds where one person is using their arm to talk on her phone, but her companion maintains firm grasp. Homosexual activity is not welcome as openly as in the United States, so no one mistakes any of the hand-holding for other than innocent friendship. Hand-holding among males is basically forbidden, but one will see brotherly arm supporting, more than in America.

The concentration of huge corporate-sized coffee shops in Seoul is comical. Even forewarned with exaggeration, you would still be impressed by the number of coffee places. There are plenty of small coffee shops, but there are many corporate chains everywhere. Starbucks. Paris Baguette. Hollys Coffee. Coffee Bean & Tea. etc. I entered a few dozen at least. These shops are massive too. In most other parts of the world, it can be a struggle to get seats or use the restroom, but the stores here often can house more than a hundred people. A few of the largest coffee shops in the world, by square footage, are located in Seoul, often spanning four floors, filled with young students cramming past midnight. Most of the time I entered a coffee shop, I never bought anything, as I would use them as rest stops.

As popular as coffee shops is the prevalence of face shops or stores that sell dermatological products. It has been well documented that Koreans are the leading consumer of facial plastic surgery in the world. They are a vain bunch. Before-and-after advertisements for plastic surgery shamelessly grace billboards, television commercials, and movie trailers. I am not a fan of beauty products, but it is amusing to see how obsessed Koreans are over their skin. I have my own admittedly peculiar tendencies, but they are mostly limited to avoiding beauty products and excessive ultraviolet radiation.

Food and Drink
Many people enjoy Korean food, although I do not relish it with the enthusiasm of people who tell me, “I love Korean food!” Korean food is often spicy and meat dishes can be expensive. Seoul used to be more affordable, but its cost-of-living is now closer to Tokyo, which has never been a cheap place.

Combine two things everyone loves, and you have heaven. Macaron ice cream costs US$4. I had never seen this treat until Seoul, but these stands are easily found here.

Koreans love to drink, especially this forgettable 20% alcoholic soju, which comes in immediately recognizable 360 ml green bottles. There is a certain ritual to pouring other’s drink. I drank heavily enough that I got sick one morning. The normal western bar where one simply sidles up and orders just a drink is rare. At nightclubs, restaurants, and beer halls, there is often a minimum charge so food is always present. Even after gluttonous meals, I would go to a bar, only to have a spread of more food available. I viewed at as a cover charge, as I am not a huge fan of eating when already sated.

I saw this Louis Vuitton exhibition in Jongno. I liked it much more than I would have expected.

Lodging
I spent 24 nights in Seoul. I arrived into the city without long-term lodging, so I used CouchSurfing for the first three nights to buy myself some time. I slept on the floor of an English teacher’s flat in Seongdong-gu. The flat was tiny, which is not unusual in Seoul. Seoulites are used to extreme density and compressed spaces. Even many bathrooms do not have room for a shower partition, so water is simply sprayed everywhere.

I imagine CouchSurfing has been declining in use, as many potential hosts have opted to monetize on Airbnb and other for-profit platforms. After my first three nights, I stayed with my older cousin’s family for the balance of my stay.

My first and only CouchSurfing experience. Thank you Katie!

Suwon
On Tuesday, April 21, I took a day trip to Suwon, the site of one of South Korea’s 11 UNESCO World Heritage Sites, Hwaseong Fortress. The defensive walls have survived, but they seem easily scalable without any equipment! Suwon is only 34 km south of Seoul, and it takes a little more than an hour to get there using a combination of subway and bus. Unbeknownst to anyone outside of Korea, Suwon is a city of 1.2 million, although it has nowhere near the hustle and bustle of Seoul.

There were so many kids on school field trips at this UNESCO World Heritage site. There was a random archery station.

Brave instructor standing between wild children and their targets

A trolley I rode in Suwon

Mr. Toilet House, a museum that often shows up on lists of the most unusual in the world

I liked this skyscraper in Samseong-Dong, one of the most affluent neighborhoods.

I went to this small festival one Saturday. Unfortunately, the offerings were more limited than “beer festival” would suggest.

How to Max out Shanghai in Less than 72 Hours